Edith, of the Excelsa line, was last shown at the 2015 Royal Berkshire Show by Chris Impey.

I decided to buy her as dam to Bear, Kilcot Peter Lad, also at this his last show with Sharon Barnfield.

I collected Bear in October and Edith arrived in November. They were in neighbouring paddocks until January when they were put in together.

Edith soon became tired of Bear’s attentions and decided to brave the electric fencing and join the herd of cross-breed sows, weaners and piglets. They all free-ranged together over about 7 acres of rough pasture and old woodland. Perfect for pigs.

I had planned for Edith to farrow within the confines of a small paddock and inside an ark but she had other ideas, as I had thought she might. One day, she was nowhere to be seen and finding a black pig, however large, proved an impossible task but as the day darkened, so I heard branches cracking in the copse and I found Edith building a magnificent nest under a fallen pine tree.

The other pigs left her alone to get on with her work and I invited Jane (Bissett, Kennixton Flock) to join me and watch this beautiful animal build her own farrowing space through the night. In the morning, I found her stretched out in a bed of pine needles and assorted dry matter having already given birth to two piglets. The first of the Swanbridge pedigree Berkshire herd. A dream come true.

Jane and I had tea and cake and witnessed 9 piglets farrowed with the sow doing well and needing no intervention from us. Edith had positioned herself such that one back leg was braced against a tree stump and the other hooked over a branch above with the newborns free to find her milk without risking a kick. I like to think this was deliberate on Edith’s part.

The only problems with Edith’s free-birthing decision were mine. The weather became cold and I worried. Trudges across the field through the frosty nights, with extra food and water and straw, for Edith and her sander were well worthwhile and whilst, sadly, two piglets were lost to crushing, 7 stonking weaners are now free-ranging with the herd two months later.

Watching Edith protect those piglets during the first weeks was an utter privilege. Every time she left them, however briefly, they were covered with dry material. The nest was divided into three sections – feeding, sleeping and play areas. She had chosen a spot not only under a fallen pine but beside an old wall so it afforded protection from any possible predators as well as being bone dry when it rained and sheltered from the wind.

Edith has never shown any aggression towards her human minders and continues to be a delightful and caring mum to her brood.

As examples of the Berkshire breed, she and the sire, Bear, show all the required characteristics – winning build and markings, gentle temperaments and charismatic natures. I am sure that their offspring will be just the same.
Please feel free to follow their stories on Facebook Swanbridge Porkers, Twitter @HelenJoy20 and at www.ValerieChicken.wordpress.com 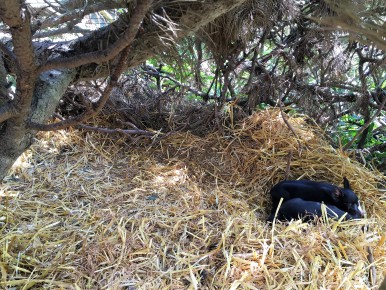 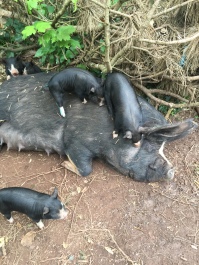